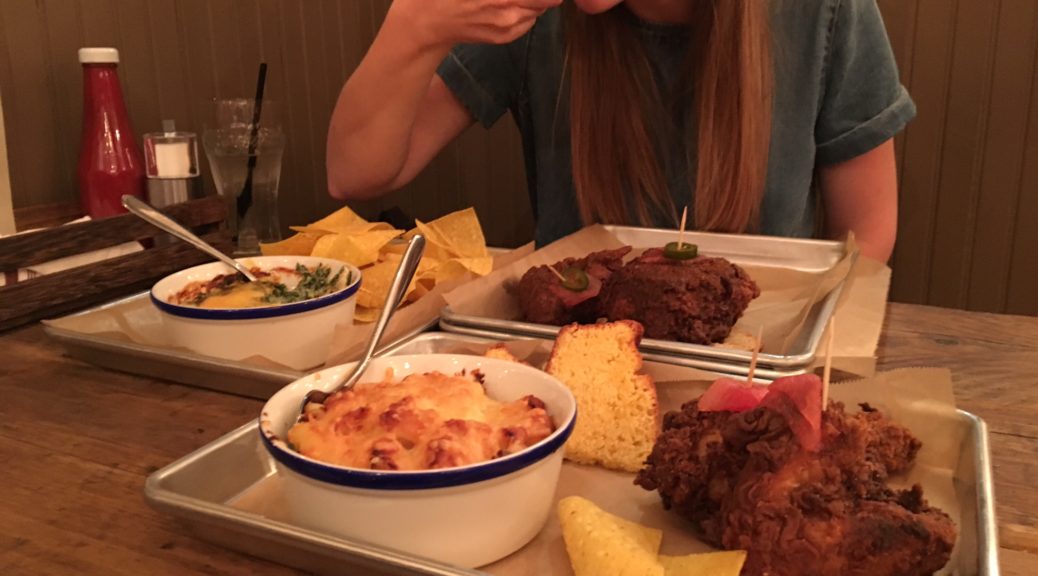 Not every restaurant goes out of its way to recruit diners off the street.

My dinner companion arrived before me for our meal at Stagolee’s, the latest addition to Fulham’s culinary scene, and was waiting outside when manager Lee came out to offer her a card – then a prime seat at the bar.

By the time I got there, my friend and barman Ollie were chatting away like old pals. He already knew what she liked to drink. They already knew my name.

Which goes to show, Stagolee’s isn’t like ‘every’ restaurant.

The concept is chicken and liquor and why not; chicken is having a moment, with Nick Jones’ Chicken Shop expanding across the capital and Bird and Chick ‘n’ Sours doing poultry at its finest.

It’s tempting to use gimmicks to stand out in this crowded coop but Stagolee’s doesn’t need them for it has conquered the holy grail of authenticity.

This is, in large part, thanks to founders Jordan Harris and Ashley James (she is also the chef, but more on her later). They are Texas and Tennessee natives respectively; Stagolee’s South American hot chicken is the food they have spent their life eating. What brought them to Fulham? They did their homework. Fulham has a high US contingent – a ready, receptive audience.

If southern hospitality is a stereotype then I had always hoped it was one that stands up to scrutiny. It does at Stagolee’s.

We couldn’t have had a warmer welcome from waiter Lee and our old mucker, barman Ollie – and Ollie knows his stuff. We followed his recommendations and spent the night drinking heady, boozy concoction of Kentucky bourbon (they import it) and their own take on Moonshine. 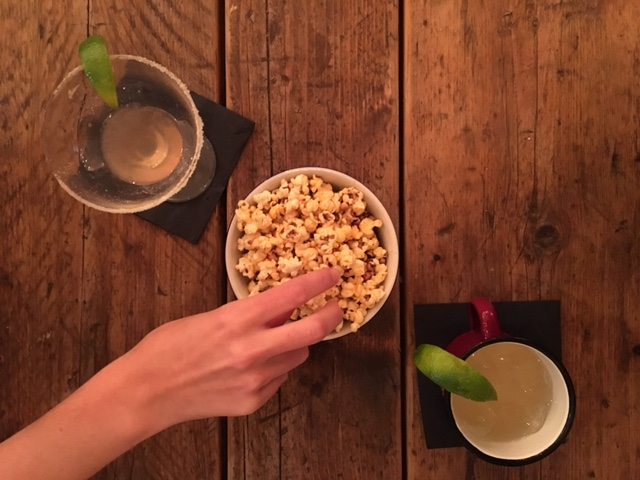 It wasn’t very busy on the Wednesday night we went but owner Jordan creates atmosphere single-handedly. He is so affable we might have invited him to join us were we not so busy chowing down.

We eschewed the sharing platter for mains of our own and a selection of sides.

The option is chicken or fish; on this occasion, both my fish-allergic friend and I opted for chicken. It comes skillet fried (brined, dipped in buttermilk and crispy), hot or very hot indeed, so we ordered one skillet fried and, in the name of good journalism, one hot. With my weak palette I would need the guarantee of a Pulitzer to attempt the Very Hot.

The skillet fried chicken fell of the bone and had a delicate crumb but it was the hot that stole our hearts. Yes, there’s heat but it is full of flavour and dangerously moreish. Order with side of carrot salad, a miraculous palette cooler that comes jewelled with plump currants. 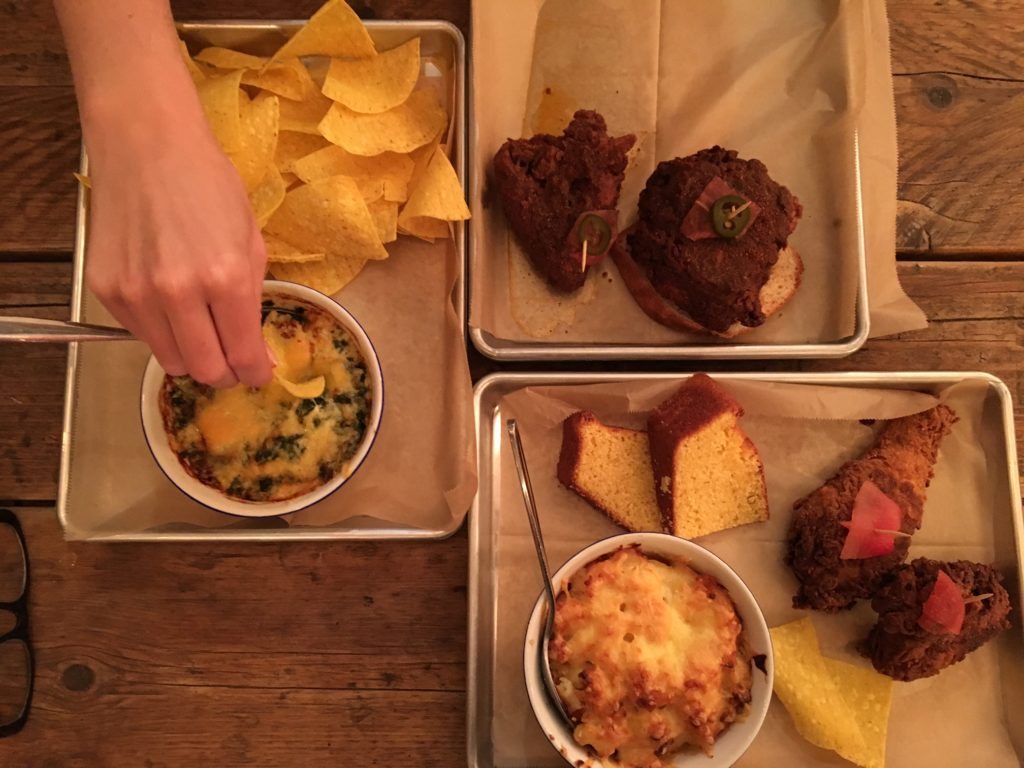 Then there are the sides. Jordan is a Sides Man and careful thought has gone into each.

We went for the hot spinach dip, a rich and gooey concoction of cheese, artichoke and spinach that was even recommended by the press release.

We piled it onto crisp nachos and gobbled the whole lot up. I am now a converted Sides Lady.

There was mac’n’cheese with a crisp top and unctuous sauce, and cornbread, served in hunks that were sweet and pleasingly light.

We couldn’t resist dessert when it was offered. First up was a bowl of Bonuts: bread-doughnut hybrids doused in crystal sugar and served warm with a milky dollop of cream. The aroma was reminiscent of all your best childhood memories; they smelt of the fairground but had a savoury edge and magical lightness that elevated them beyond anything you’ve ever eaten on a Ferris wheel.

Because we are greedy, there was Key Lime Pie too. The base was crispy and grainy as it should be, then it melts on the tongue. The filling hit the right level of limey-ness – a playful punch rather than a baseball bat to the head that some lime desserts give you. 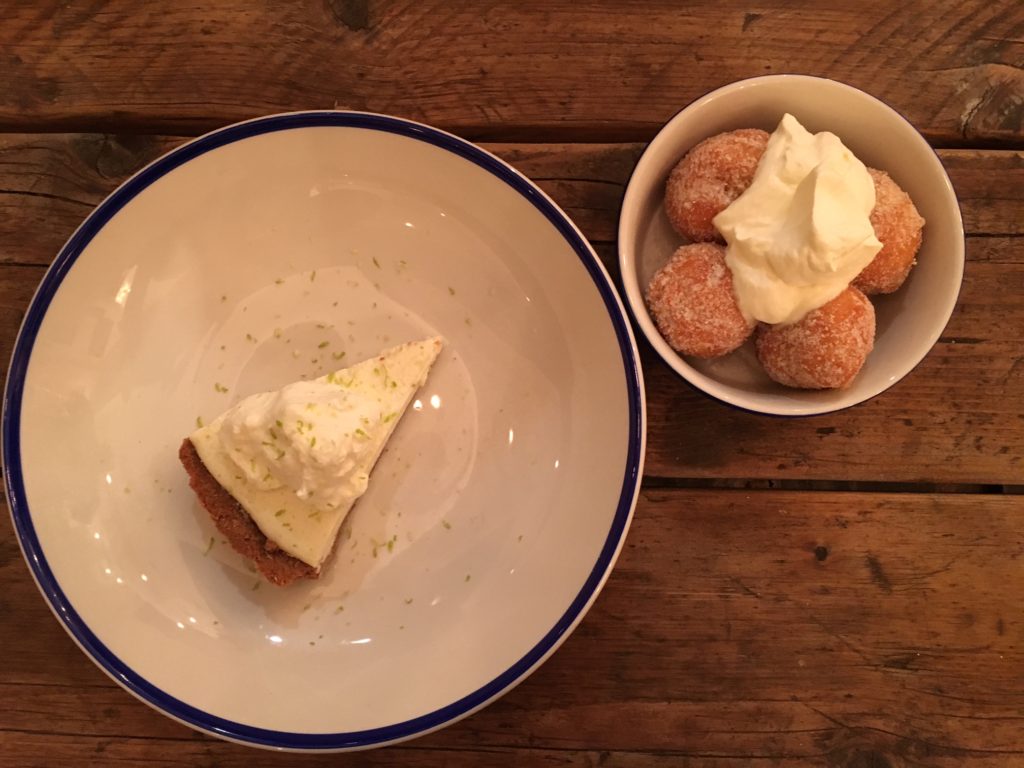 With its bare bulbs and exposed brickwork, there is something endearingly understated about Stagolee’s and I can’t help but feel a lot of that comes from chef Ashley.

A former Sous Chef at New York’s Rainbow Room and trainee of Tom Aikens, she applies top-level skill to recipes influenced by her grandmother. It is offered up as comfort food but vaulted up to top-notch by her balanced touch. She makes as much from scratch as she can, from the jams and jellies that accompanied our Bonuts to the bread. She is currently waiting on a smoker so she can make her own, perfect bacon.

Will this homely, heartfelt approach be sustainable once the punters start rolling in? Jordan is at his best talking one-on-one; Ashley’s culinary alchemy needs the sort of time that second sittings don’t allow.

We’ll have to wait, and hope that it is does. With its Fulham location and clear USP, Stagolee’s seems like a smart move – but its heart is what makes it special.

Want my advice? Go now and feel the love.