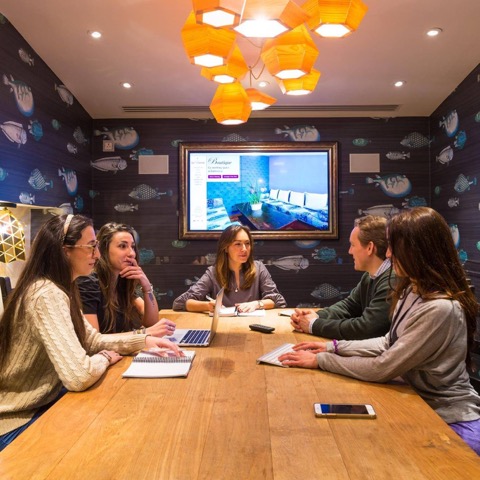 Coworking is the antithesis of the stuffy, corporate office environment, yet the need for quiet space, power sockets and WiFi connection means that most workers are still tethered to their desks. Research is starting to show that, even in a flexible coworking space, this could be bad for productivity.

The solution? Get outdoors.  A recent survey conducted by American company LL Bean in conjunction with US-based coworking chain Industrious revealed that 75 per cent of those questioned rarely or never ventured outdoors to work, while 57 per cent go outdoors for less than 30 minutes of their total working day, even though most agreed that time outside improved mood, lowered stress and aids relaxation, in turn, improving health and sustaining a positive outlook.

Read: Only girls allowed: the rise of female-only coworking

Having analysed the data it captured in more depth, Industrious found that people who take their work outside tend to be more creative and productive.

Ideation sessions, taking calls and holding meetings can all be done out in the open and tend to herald better results. Time outdoors also gives workers the chance to reflect on and work through complex issues.

Ideally, argues Industrious co-founder and CEO Jamie Hodari, the best coworking offices are located near green space so that workers can get outdoors with ease and spend the time in a pleasant environment. Yet with green space at a premium in London, the next best thing is to bring the outdoors in.

Decorating with plants – also known as biophilic design – is the obvious way to do this.  Plants mimic the calming effect of being surrounded by nature and produce and circulate oxygen which positively impacts concentration.

Light is another vital component.  Industrious noted that window seats are the first spots to be claimed; not only do these prime seats offer plenty of light,  workers can look out, see other people as well as sky and trees, which connects them to the world and humanises the working experience.

If being outdoors isn’t an option, movement is the next best thing. Coworking offices facilitate movement by giving members multiple areas where they can work, all of which are designed for different tasks. Most coworking spaces feature a combination of quiet, private desk space for concentrated tasks; communal areas for discussion and collaboration and chill out zones where members can de-stress or undertake work in an unpressurised environment.

Working in different spots around the office is also the best way to meet other coworking members, collaborate and share ideas. With much of the summer still ahead of us, there’s no better time to invite your fellow coworkers for lunch outside. You will all feel better for it, and your work is likely to improve.