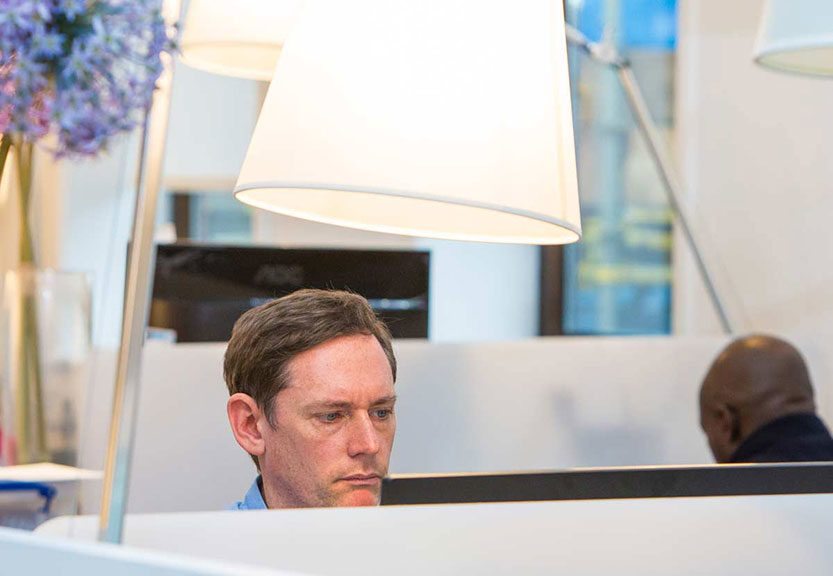 Co working offices are no longer the preserve of entrepreneurs and start ups. Shared office space is now big news for big businesses seeking to provide a better work life balance for employees and benefit from being close to cutting edge SMEs.

Data released by the Global Workspace Association (GWA) in 2017 revealed that corporate users made up 12 per cent of co working members, and providers of co working offices have caught on: many now offer private offices within their co working space so that corporations can protect sensitive information.

So which of the big corporations are embracing the co working model? We’ve rounded up eight, and you might just be surprised.

Read: 6 of the coolest co working offices around the world >>

Meeting the constant innovation of the tech sector head on, Barclays launched its first  Rise location in New York in 2015, followed by Rise London last year. Created to be a ‘physical space and virtual global community designed to pioneer the future of  financial technology‘  Rise houses co working space, holds events and also hosts its Accelerator programme there.

With over seven floors and 40 plus companies, Rise London in Shoreditch is the biggest FinTech co-working space in Europe.

The software giant has been utilising co working spaces since 2014, starting with sites in San Francisco. They are partnered with co working provider Galvinize and last year took on all the desks in a We Work site in what was thought to be the first deal of its kind.

Angel Diaz, IBM’s vice president of cloud and open technology, has praised the co working model for its ability to encourage innovation and collaborative thinking.

Microsoft made waves in 2016 by offering co working space to 30% of its sales staff in New York.

Its offices in Switzerland are located in a ‘smart’ building, with the first floor dedicated to co working. Members use an app to book working sessions in different ‘working zones’, all of which are tailored to individual requirements. Face recognition software logs them in on arrival and sensors around the office communicate with the app so that users can see where there free desks.

Apple surprised the world in 2017  when it moved some of its staff to the Mindspace co working office in Berlin. It was a mysterious decision for the notoriously private brand and to this day Apple has refused to confirm whether they even had a temporary presence there.

Google’s Campus is one of the most renowned co working offices in London. Its four-month Residency programme provides bespoke, one-to-one support to growth-stage start ups; it is free to join but each start up must face a judging panel to and prove that their idea is cutting edge and world-changing in order to get on. In return, chosen start ups are expected to devote some time and energy giving back to the Campus Community.

Members can attend events, lectures and exercise classes, and there is even a baby-friendly programme, Campus for Moms.

Perhaps the most surprising of all, KPMG has a small outpost at Interchange, a London co working office located in Camden. The professional services firm has a private office where a small team work alongside tech start ups, often offering free advice.

Aside from offering its employees greater flexibility, KPMG is hoping to shrug off its somewhat stuffy, corporate image. As is the case for all the corporations that have embraced co working, they can keep an eye on competitors and remain up to date with the latest innovations within their sector.